On many fronts Russ Snedker defies categorisation: he is a self taught artist and creative working in many disciplines and media, namely photography, painting, drawings, illustration, mixed media, design and sculpture. He bears the Danish surname of his grandfather and can trace parts of his family to Switzerland and Italy, and he has spent long periods overseas working for global, blue chip brands. However, now based at St Michael’s Studios, Bridport, Russ largely pursues and explores his own designs and passions, mostly through collaborative, commissioned pieces. Photography invariably provides the starting point for a painting or a sculpture, and his skills in this area stem from the time he spent as a youngster observing and assisting his grandfather, himself a keen amateur photographer. 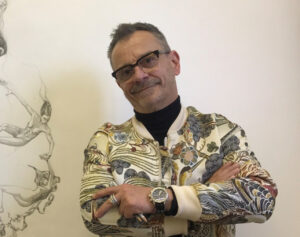 Russ has lived in Dorset since 2016, returning to the UK after having lived abroad, and his introduction to the people and the arts of Bridport came when he helped out on a friend’s market stall. He credits the friendliness of the folk he encountered there, along with the glories of the Jurassic coast, in making the county a welcoming and compelling base from which to live and work. However, he balances this by acknowledging that he is equally attracted by Eastern perspectives, as provided by locations such as Shanghai, with their rich cultural and artistic heritage, and he cites the works of Japanese writer Haruki Marakami as being amongst his fictional favourites. 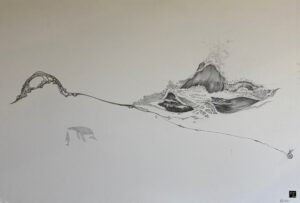 In considering another early influence on his working methods Russ reflects on the exciting coverage of the first moon landings in 1969 and in particular the images of astronauts’ spacecraft which totally captivated him. Through the study of photographs of these unique vehicles and their component parts he sought to reproduce them in detailed drawings. Later, and in an early role, Russ employed his eye for detail and love of precision in the production of life size technical diagrams of circuit boards for British Telecom. Gaining in experience, he moved on to major roles in art direction and photography for a number of fashion magazines and publishers in both the UK and abroad.

In our recent lockdown circumstances Russ has increasingly turned to the style of abstraction to express his ideas and enthusiasms, chiefly executed in pencil drawings. Three of his drawings will be offered in the forthcoming Dorset Art Weeks’ online auction – and, one of these, Flow I, can be attributed to the recent study required during the production of a portrait of a horse. The commissioned drawing saw him give prominence to the natural, innate design of the head and neck of the horse, and through this Russ became fascinated by the horse’s jaw and its anatomy. Flow I works at several levels – through the pencil Russ conveys both the surface sheen of the horse’s coat as well as the underlying strength and power of the animal’s body. However, prior knowledge of the inspirational horse portrait is not a pre-requisite for the viewer, as Flow I is the pure expression of energy and dynamism as seen in the natural world. 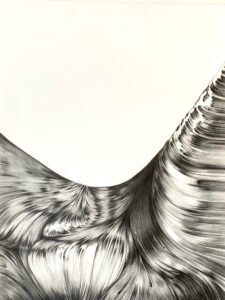 In Russ’s drawings at auction this July we discover the magic and possibilities of graphite – not only through its ability to indicate design and create form, but, also the sheer range of its actual physical matter,  across the range of leads from 6H to 9B as used by Russ, which add dimension and texture to a work.

News
2020-06-18
We use cookies on our site to give you the best possible customer experience. By continuing to use our website, you accept our use of cookies.
© 2023 The Auction Hub. All rights reserved