Paul Cleden knew from the age of 8 that he wanted to be an artist, and nine years later when a print maker taught for just a term at his school his future was mapped, and through him he discovered many of the print making techniques normally only covered at art college. Paul is both an illustrator and print maker, and he studied Illustration at college; on graduation he initially worked as a book and magazine illustrator, but having covered printing in his foundation year, he found that the practise suited his thinking – it’s not an immediate art and it requires exploration and consideration. 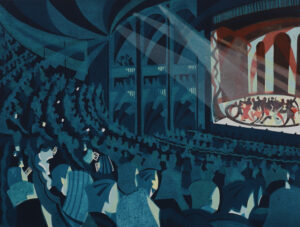 Paul and his family moved to Dorset over 20 years ago, and here he took up a post teaching print, however, he was soon in the position to make the transition to the role of full time artist. He works from his Victorian home in Dorchester and for the last Dorset Art Weeks event in 2018 converted two rooms here to accommodate the visitors. He enjoyed the ‘face to face’ component of meeting and talking and showing his works, but, admits that he is always having to explain that he is not a painter and that he produces original, printed works.

Paul Cleden’s prints invariably display figurative movement, with sports frequently depicted, given  the wide range of physical shapes and action. People in crowds – leaving a train, at the theatre or a dance hall, or in the case of one of his Dorset Art Weeks works, Wet Walk, striding left and right in the rain, under umbrellas and a dynamic sky. In our current period of social distancing, both sport and groups of people feel reminiscent of a long lost, almost luxurious, way of life, he notes. And, thinking ahead to new work Paul’s sights are on farms ‘at work’, capturing the sheer physical work of people who tend animals and work on the land. Water is another motif which interests him, with Weymouth a location within his sights. The preparation of dancers and the anticipation of the audience before a show has also caught his imagination. 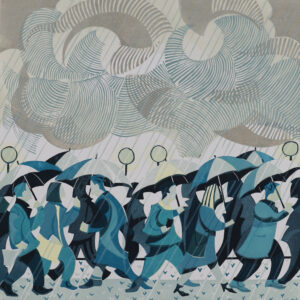 Paul takes a very open approach to his working methods, and his ethos is based around sharing in order to push forward and develop the discipline. He states that it is now a good and exciting time to be a printer, the skill is undergoing a revival, having been in the doldrums in the 1970s and 80s. He also describes how having honed a technique and produced a successful print, he never repeats the process since this does not lead to ‘extension’. He observes what other print makers are doing, and likewise has ‘no secrets’ around his own processes, observing that a skill shared does not mean it is lost to or diminished for the originator.

Lockdown has seen him become incredibly busy on the work and equally the domestic front, with his daughters currently living at home. He refers to his ‘pile of ideas’ and has found it challenging carving out the time to tackle them all. A rather nice result of having a bit more time to peruse social media and to comment too has brought about an exciting new collaboration with Penfold Press: screen prints, for which he is creating positives to realise his lively designs based around fairground rides. The project has also given him the opportunity to use texture within the colours of the print – an additional characteristic which has long intrigued him and so through this partnership he has the vehicle for experimentation, and his desire to extend is fulfilled. 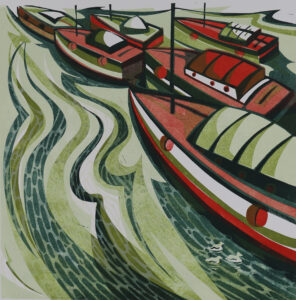 News
2020-07-06
We use cookies on our site to give you the best possible customer experience. By continuing to use our website, you accept our use of cookies.
© 2023 The Auction Hub. All rights reserved