Stephen Bithell’s works in the forthcoming Dorset Art Weeks auction are a clear departure from the plein air landscapes for which he is known. All three depict places to be found in his home town of Weymouth and one, Dappled Light Horse Chestnut Avenue, even bears the words Covid 19 along with his signature and the date, April 2020, as testament to the context of our remarkable circumstances. In reflecting on our lockdown times Stephen says he’s now looking at places he would never have considered as motifs before the pandemic, and his recent oils depict buildings and the manmade environment. Where, in the past, he would have to take people out from the scene he was painting, the current restrictions placed on our movements have presented him with human-free vistas. 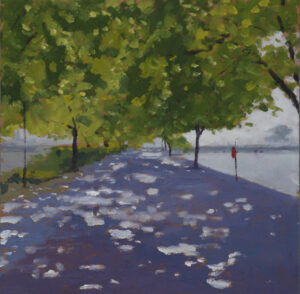 Of his style, Stephen Bithell has said he likes to think that he follows a method and process which would be understood by Constable, Pissarro and Tom Roberts. In his personal focus on the Dorset countryside for his landscapes Stephen comments that he captures it, ‘in all its moods from light and tranquil to foreboding and isolating’.  And, there are also links to places these artists would have also known and revered – Stephen’s family are from Constable’s own county, Suffolk, and Tom Roberts was born in Dorchester, and left Dorset for Australia aged thirteen. Pallington Lakes, the home of Sculpture by the Lakes, near Dorchester, is the location where Stephen is most often to be found, and he finds it to be a tireless source of constant inspiration.

However, as his studio the plein air setting can bring challenges – aside from the vicissitudes of the English weather – namely, his exposure to the feedback of passers-by. Stephen admits he finds some comments amusing, but, also feels it would perhaps be an interesting exercise to record and play back the more outspoken remarks he has received from some observers. An upside to these interruptions is that in going back to his work, he will start again at a different point in the painting and with this comes a fresh perspective.

In contrast to the ever-changing scenes he’ll encounter, Stephen sets forth to paint outdoors with the same items every time: a McVities tin, to hold his cut down brushes, a Kendal mint cake tin, which acts as the palette for his carefully curated range of oil paints and a hand easel. He describes how over the last few years he has been gradually taking out pure colour from his work and increasingly focusing on understanding and using ranges of specific colours, with the shades falling under the enigmatic green being of particular interest. Interestingly, an element of re-cycling is also part of his work, at the material level he will invariably re-use cardboard or paper for his oil paintings; whereas in his art, a memorable sky from one landscape might be deployed as the sky in another. 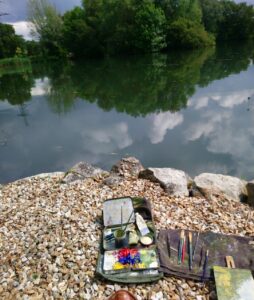 In moving away, albeit, perhaps temporarily from landscapes, Stephen acknowledges that Weymouth’s built surroundings have provided him with opportunities not usually available or seen in the natural world. It’s Pantomime Time, Weymouth Pavilion, one of his works in the auction, provides a wonderfully ironic and under-stated commentary on our present predicament. 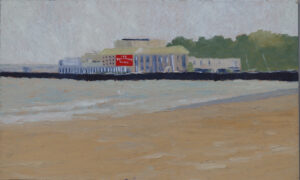 News
2020-06-27
We use cookies on our site to give you the best possible customer experience. By continuing to use our website, you accept our use of cookies.
© 2023 The Auction Hub. All rights reserved