Alistair Erskine has worked as a decorative artist for over 30 years, collaborating with leading interior decorators in both the UK and overseas. His work ranges from special paint finishes and paint effects to hand painted and stencilled motifs as well as mural paintings for contemporary and traditional settings. A browse through his back catalogue of assignments reveals a host of breath taking and awe-inspiring interior spaces and features transformed by his immaculate eye for decoration, design and a multitude of clever painterly techniques. 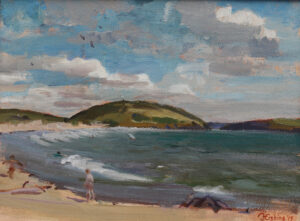 However, Alistair also finds time to be a painter, both en plein air and of still life, and 2020 was to have seen his first participation in Dorset Art Weeks; his paintings most often selling through solo or group shows held locally and in London. The recent slowdown in interior decorating commissions – the inevitable result of the lockdown – has given him more time for painting outdoors, and when the weather is dull, he has experimented with new techniques indoors through his still life subjects. He admits he has enjoyed the enforced holiday from the more-regular day job but now is equally content to see the business for interior decoration and design picking up again.

For his plein air works, Alistair visits the landscapes of Dorset, Hampshire, the West Country and East Anglia, as well as locations in France and Italy; fishing on the Avon and Test provides him with numerous motifs and rich themes.  Unlike his decorative work, his paintings rarely come about through commissions, and he tends to paint what he likes and enjoys. As these interiors’ projects are produced in oil it was natural for him to utilise his deep experience with the media in his paintings. 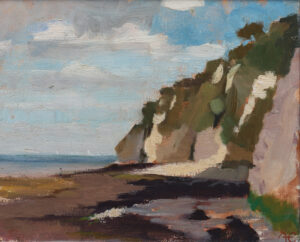 Initially the sketchpad provides the starting point for every single work, and through pencil and paper Alistair works out what the painting ‘will be about’. His aim is to capture the spontaneity and the overall mood to be found in a natural scene – as seen through its invariably fleeting and ever-changing light – and he presents an interpretation rather than representation. When happy that the sketch works he then takes up his oils. The ability to mix oils quickly and to master the colour palette underpins plein air painting, and once commenced it has to be a quick process as this is England after all, when clouds can assemble in a matter of seconds totally transforming the feel of a scene and the character of the colours to be seen within it. He might re-visit the site but this does not often happen and is rarely needed, given that the temper of his work is so specific to a short time period on a single day.

Alistair has derived his own style through ‘sticking to the guns’ of his own aesthetics, but not without studying and seeking to understand the methods as well as the inspiration behind the work of many other artists, notably Constable, Corot, Leighton and Nicholson. He also admires abstract works and has seen how successfully they can be deployed to great effect within a variety of interiors. His own experimentation with a range of different techniques has brought about a certain uncomfortableness, which has reinforced his approach ‘to be true’ to his own modes. 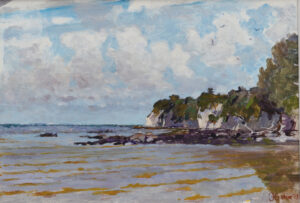 In 2011 Alistair was appointed the official artist for a Royal tour of Spain, Portugal and Morocco undertaken by the Prince of Wales. The tradition of official artists accompanying and capturing such tours dates from the reign of Queen Victoria, who, along with her husband Prince Albert, was an accomplished artist. For 10 days Alistair worked at a tremendous pace, not only given the nature of plein air work, but also due to the sheer speed of the well-oiled machine behind a Royal tour packed as it has to be with official engagements filling every day and all timed down to the minute. A selection of the paintings from the tour are to be found in the Royal Collection and a sell-out exhibition of others was held in London that same year.

News
2020-07-16
We use cookies on our site to give you the best possible customer experience. By continuing to use our website, you accept our use of cookies.
© 2023 The Auction Hub. All rights reserved